Like Persian Cats, Writing a Mystery Must Be Brushed and Stroked

In the past two years, I’ve learned that writing fiction is a lot like combing a matted Persian cat. It takes a lot of patience and determination. And sometimes the cat bites back.

For the last twenty years, I’ve written philosophy and nonfiction, and until lately it was very satisfying. But, a few years ago, writing philosophy started feeling a little routine—you know, thinking hard thoughts and writing them down. Anyway, I’d always wanted to write fiction. The trouble was, for decades I’d been trained to get right to the point and hit readers over the head with my thesis. With mystery, you have to do the opposite and hide the point, meander along, and create suspense. Like sneaking up on a weary long-haired cat, to write mysteries you have to have a few tricks in your grooming kit. 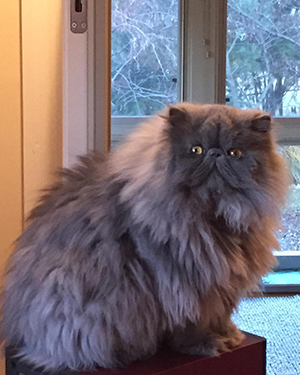 I got the courage to switch from writing nonfiction to fiction after attending a Killer Nashville Mystery Writers’ Conference. The 2014 convention gave me just enough ammunition to make me dangerous. The four-hour session on writing your opening line sponsored by Sisters in Crime had me on the edge of my seat. I loved mystery writing already and I hadn’t even written my first word.

Immediately after the convention, I wrote the first draft of Wolf in two months and spent the next two years editing it. During that same time, I also wrote Coyote, and alternated between editing one and then the other. For decades, I’ve relied on nonfiction writing to keep me sane. Now, writing novels, I find even more pleasure in inventing characters and whole worlds. But, like everything fun that’s worth doing, it’s also hard work! And when you’re determined to finish that next novel, you can get saddle sores… not to mention cramps in your fingers. Giving that matty cat a good brushing can be exhausting!

For me, the best way to write is to get something down on the page. Then comes the hard part, revising and editing. After writing quick first drafts, I go back and revise and revise and revise, concentrating on several key aspects of writing, including: consistent point of view, strong action verbs that show rather than tell, and interspersing enough backstory to enrich characters without sacrificing action.

Each chapter or section needs to stay within its main character’s point of view both in terms of what she says, how she says it, and descriptions of place and action. How she describes the situation tells us a lot about her. But it has to be consistent. In a first draft, it’s easy to drop out of your character’s point of view, and that’s why you need to revise. For example, a character probably wouldn’t describe herself using these adjectives “her delicate beautiful hands” or “her exquisite lips and soft silky hair,” unless she was a narcissist. And of course, she can’t describe something she doesn’t see or can’t possibly know. On repeated careful readings, these spots start to stand out like “hot spots” (a polite euphemism for ring worm) on your beautiful Persian kitten’s coat.

It’s challenging and fun to go back through your manuscript to replace common verbs like looked, pulled, pushed, or walked, with more exciting stronger verbs such as glanced or stared, hauled or yanked, shoved or thrust, strode or sauntered, etc., again with an eye to consistency in point of view. So “she looked at him, pulled his hair, pushed him down, then walked away,” becomes “she glared at him, yanked his hair, shoved him down, then strode away.” Speaking of pulling and yanking, you have to keep at it, teasing out those pesky mats that mar the flow of your story.

Finally, balancing backstory and action can be tricky. You have to cut out big matted chunks of backstory to keep the action moving. Then go back and add a subtle dusting of backstory—one-liners are best—throughout the novel. Once you hook your readers on the action in the first few chapters, you can always add more backstory later, still keeping your readers on a “need to know” basis when it comes to the past.

You have to keep brushing, combing, and teasing out the mats in your novel. Like the coat of that Persian cat, with every stroke, it will get smoother and finer until it flows beautifully. But, then there are the days when you just have to say to hell with it and get out the clippers!

Kelly Oliver is Distinguished Professor of Philosophy at Vanderbilt University and well-known feminist philosopher. She is the author of fourteen nonfiction books, most recently, Hunting Girls: Sexual Violence from The Hunger Games to Rape on Campus (Columbia University Press, May 2016). Her work has been translated into seven languages, and she has been featured in the The New York Times and on ABC television news. Kelly is releasing a new mystery trilogy featuring kickass heroine Jessica James, a Montana “cowgirl” and philosophy grad student taking on ripped-from-the-headlines crimes like date rape drugs on campus, sex trafficking, fracking and more. The adventure begins with trilogy debut Wolf (Kaos Press, June 2016) and Jessica’s adventures continue in Coyote (August 2016).

(To be a part of the Killer Nashville Guest Blog, send a query to contact@killernashville.com. We’d love to hear from you.)